The late 19th century saw the discovery of many mastodon fossils across southern Wisconsin. The University of Wisconsin-Madison acquired some of these fossils in an effort to display a complete mastodon skeleton for the visiting public. In preparation for our mastodon’s 100th year on display, our museum staff began researching the specimen’s historical and geological past.

A Pair of Historic Mastodons

In July of 1897 numerous mastodon (Mammut americanum) bones were discovered near the town of Boaz, Wisconsin. Another partial mastodon skeleton was unearthed roughly 50 kilometers to the southwest in the small hamlet of Anderson Mills the following summer, in July of 1898. This find was better preserved and produced more than sixty complete elements. Shortly after being recovered, the remains from both localities were purchased separately by the State of Wisconsin for the University of Wisconsin Geology Museum (UWGM). 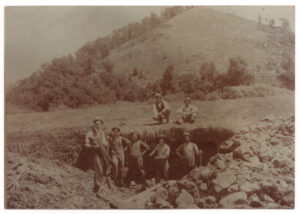 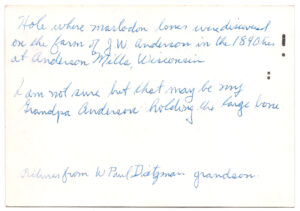 In the fall of 1915 a mastodon skeleton was put on display in the UWGM which for almost a century was attributed to the Boaz mastodon. Many lines of evidence indicate, however, that this skeleton is a composite. Most of the bones are from the Anderson Mills mastodon, while the others are assigned tentatively to the Boaz mastodon.

The left femur, mandible, and several other bones from the mounted skeleton appear in historical photographs of the Anderson Mills site. Newspaper accounts of this find also mention two ribs with healed fractures, both of which are present. The left humerus and left femur ­­­from the Anderson Mills mastodon yielded AMS radiocarbon dates of roughly 12,900 calendar years BP. The right tibia and left first rib differ greatly from the other bones in preservation, wear, and coloration. They have AMS radiocarbon dates of roughly 12,150 calendar years BP and are most likely from the Boaz mastodon.

Read more about this work in a story published by the Milwaukee Journal Sentinel on May 21, 2015: “Mastodon Mystery: Researcher unravels century-old woolly tale to find truth behind legendary massive bones”

Part of this work included a cooperation with the Wisconsin Institutes for Medical Research and the use of their computerized tomography (CT) scanner. These scans helped us to see how the bones had been reconstructed in the early 1900’s and also helped us to select appropriate sites to sample the bone for geochemical analyses.